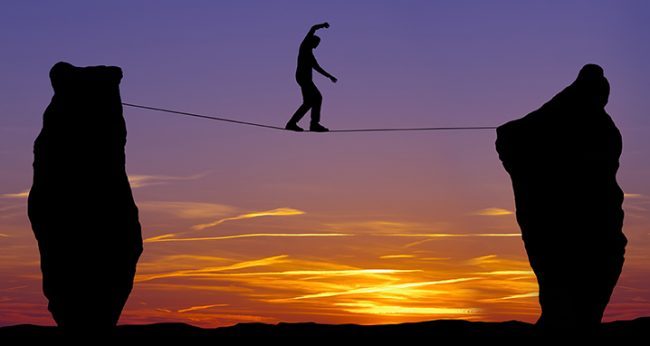 On a recent bright Minnesota morning, tucked into one of the thousands of conference rooms across the state, a management team sat somberly. Several weeks earlier they had participated in a meaningful retreat with key employees and clients, rediscovering and clarifying their vision, values, and goals for the organization. Spirits were high that day and energy seemed to crackle as it moved about the room, fueled by the vision of what they wanted to create. Now, however, new developments in corporate politics made the vision seem nigh on impossible, and the group was about to surrender in defeat, once again melting into the mediocrity of organizational bureaucracy.

Finding personal courage is hard enough, but what happens when an entire organization needs courage?1Courage is the will to act in spite of fear or despair, for the purpose of human growth. Fostering organizational courage is difficult but the key lies in being true to vision and values while at the same time embracing current reality, despair, and fears.

What takes courage in an organization?

This sounds simple, but it is extremely difficult to be honest about current reality.2 Truth hurts sometimes, and therefore we have all developed filters that remove the unpleasant parts, especially if we are party to their creation. When these filters are institutionalized, they can blind everyone in an organization to what is really going on, both internally and externally, with markets and management and finances. When people in organizations deny their reality, it also makes asking for help nearly impossible—if done, it is usually under duress while blaming others and too late for anything other than a crisis intervention.

Institutionalized filters can take many forms:

In one large corporation, the president had been so sheltered from employees and the organization in such turmoil that employees themselves started communicating horizontally via an unauthorized media platform about their concerns, feelings, and perceptions about what was happening. Upper management found out about it and planned to take action to ensure this would never happen again, but the president “stayed the execution” and silently monitored the feedback. In another organization, where the business was headed south, the division controller was told that it would be political suicide to forecast anything other than a “make” on year end numbers.

It takes courage to tell people, as openly and caringly as possible, what they may not want to hear. As an employee, it takes even more courage to give that feedback, because all too often you can be “shot” or written off as a whiner, a troublemaker, or—worse yet—a poor performer.

It’s much easier to live in a fantasy world and pretend that everything is OK and under our control. The latter is especially important in traditional management, whose function is dedicated to plan, organize, measure, and control. The underlying assumption is that we have control over the world around us, when we really don’t. The only control we have is over our own actions.

No matter where you are in an organization, there is risk involved in living values and vision.4 Granted, it is easier for an executive to demand accountability from others in this, but he or she must also live the vision and values and be willing to be held accountable for them. It takes courage to tell people what you believe in, ask to be challenged if you do not live up to it, and then really listen when someone gives you feedback!

In one example, a merger of two companies was heralded with much fanfare, and the new executive team made a point of creating and sharing their vision and values with the new organization. It was an uplifting experience, beautifully done. They used all the right words, and the pride and hope on people’s faces was evident. What a pity that the executives did not hold themselves accountable to their values for superior customer service and quality;  it showed in how they managed and treated their people, who they even referred to as “the help.” Within three months, anger and bitterness replaced the hope and pride as people felt confused and misled. Needless to say, customer service and quality declined.

Especially in an age of “Do it all, now!,” it takes courage to set priorities and make strategic choices. Just the act of telling your boss, your customers, your employees, or your constituents that you are going to focus your attention on several key issues (as opposed to the normal slateful) is difficult. Doing it is even harder. We are used to hearing ourselves and others talk about priorities, and then get distracted with a myriad of other issues that seem easier or safer or more immediate. Meanwhile, the “priorities” continue to water down until even reciting them becomes a joke. Maintaining focus takes courage, because it means making choices about how to spend your time and energy, often in new and different ways, and not everyone may be happy with the choices.

How often have you felt beaten down by “the system?” I have heard employees, managers, and CEOs from the same company lament their powerlessness to deal with “the system.” That is because it takes an incredible amount of energy to overcome systemic barriers that are actually organic in nature—they fuel their own growth. After a while it takes too much effort to be creative, and even organizational “champions” lose their spirit. The key lies not in pushing harder but in finding the leverage points necessary to create change. But it takes real courage to find the energy to do this when what you feel is complete despair that anything will help.

Fear is a “four-letter word” in organizational life. We don’t want to talk about it, and we deny we even feel it. We’ve been taught all our lives not to be afraid, so to admit fear is to admit weakness and failure, and the last place we want to do that is in our jobs or businesses!

Yet fear feeds on itself and grows in darkness; it can ultimately paralyze an entire organization. Fear is normal and OK to have. Courage means walking with fear. Naming and embracing the fears that you and others have about your organization or your future is vitally important. Until fear is brought into the open, it takes control of us and we cannot make appropriate choices. If we can acknowledge our fear, it loses its grip and we can choose to progress despite it.

What is Organizational Courage?

It is possible to be brave without being courageous. If you work long, hard hours and do what the culture expects, you might well be lauded for your heroics. At the same time, will you have really made a difference?

The root for bravery is medieval French (“brave” meaning “splendid, valient”) and medieval Italian (“bravo,” which originally meant “bold, wild, or savage”). One quickly gets the notion that bravery is all about show—and that drama, outward appearances, and public approval are important aspects of bravery—whereas the root for courage is the Latin word “cor,” meaning “heart.” So courage is about doing what is closest to the heart—in other words, what is important and gives us life. The motive for courage is what makes it special.

I define organizational courage as the will to act in the face of  fear or despair in order to enhance constructive and human growth. It means that you have a genuine concern for the development of human and organizational potential with an appreciation for the interconnectedness of all living things. Organizations are nothing more than people linked together by a web of activity toward a common end. We organize because we want to accomplish something. And when that “something” beckons us to reach beyond ourselves and join together to create something worthy of us, it is called a vision. The role of courage is to make our vision and values real.

How do you build organizational courage?

In part two of my blog post titled, “Organizational Courage, How to Build it,” I will share practical strategies and immediate action steps you can take starting tomorrow to build courage within your organization!